Home > Animal Strikes and the Law

Animal Strikes and the Law 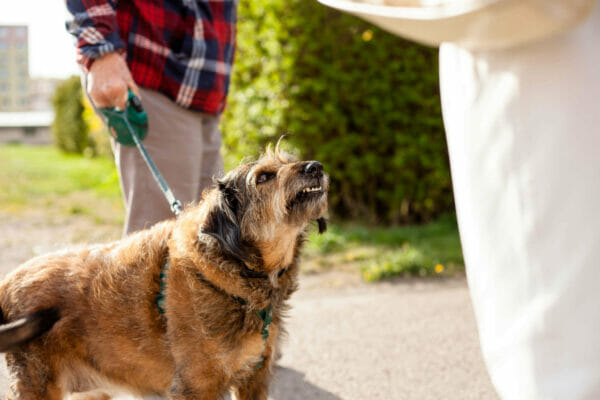 A complicated area of law involving animals is liability for an injury caused by an animal knocking the claimant over. The usual suspects in such “strike” cases are dogs and cattle. If a cow knocks a person over, that is usually deliberate and aggressive behaviour as a result of the cow feeling threatened. Cattle tend to continue to attack once a person is on the ground, causing serious injuries or death. There were at least two deaths of dog walkers caused by cows reported in 2020[1]. Each year there are deaths due to cattle – usually dog walkers but mainly those involved in the agriculture industry.

The more difficult category of claims for claimants to prove are injuries caused by animals which are not acting aggressively, but perhaps just being friendly or a little clumsy. Gemma Witherington recently successfully acted for the First to Third Defendants in a dog strike case heard over four days at Winchester County Court by HHJ Berkeley.

Mrs Menzies was out for a walk with her own dogs in the Alver Valley Country Park when she was knocked over by a Golden Retriever dog called Lottie, who was being walked under the care of a dog walker. Sadly, Mrs Menzies fractured her hip. The multi-track claim was brought against the two owners of the dog walking company, the dog walker, and the owner of the dog under the Animals Act 1971 and in negligence.

In an ex-tempore judgment delivered on 28 January 2021 HHJ Berkeley dismissed the claim.  Under the Animals Act 1971 (“the Act”), a keeper of a dog will be strictly liable if the three-stage test set out in s.2(2) of the Act is met. There are two alternate limbs which can be satisfied under section 2(2)(a) of the Act. The first question was whether Lottie was likely to run into people unless restrained. That simply was not born out in the evidence, as she was a normal, healthy dog and the vet’s records indicated there was no past behaviour of that nature. This aspect of the case was always going to be a struggle for the Claimant, as Golden Retriever dogs are not known to run into people unless restrained.

The Claimant therefore had to prove the other limb of section 2(2)(a), namely if Lottie caused damage it was likely to be severe. This was not to be answered by only considering the injury caused in the accident itself, otherwise, that would lead to an incorrect conclusion. The Judge followed the guidance given by LJ Lewison in Turnbull v Warrener[2]  to rely on the evidence in the case, and not regard the fact that a severe injury was suffered by a Claimant as being self-evident that injury was likely to be severe.

The Judge found that the risk of injury to the Claimant was a minor one. It was not to be expected that a person walking their dog in the park would suffer a dog strike causing serious injury, like a fracture. There was a real paucity of evidence of people being seriously injured by dogs knocking them over. One might expect bumps and bruises, but not serious fractures. That was rare.

The Claimant’s own animal behavioural expert had been knocked over 6 times by dogs and yet accepted in cross examination that he had never suffered a serious injury as a result. The expert and lay evidence in the case indicated various instances of dog strikes occurring, but a sore bottom and bit of embarrassment was the height of the injury.  Further, the Claimant’s expert could not point to one single peer reviewed study of dogs running at people and causing severe injury. That spoke volumes. The Claimant’s claim therefore failed at the first hurdle.

The Claimant had alleged under the next limb of the Act, section (2)(2)(b), that Lottie “ran uncontrollably”. She alleged that this was a characteristic which arose only at certain times/circumstances, i.e., when initially let off the lead in a park.

In any event, the Judge found Lottie was displaying a normal characteristic of playing at the time of the accident, and there was nothing abnormal about her behaviour. He rejected the suggestion that all dogs could be out of control when off lead and concluded that this was an unfortunate accident.

He noted that the Act was designed for cases which were quite different to the present dog strike case, which was not akin to horse rearing or dog bites. This was not a case where Lottie, the Golden Retriever, was a wolf in sheep’s clothing. The negligence claim failed for similar reasons.

It is also interesting to note the Judge’s criticisms of the Claimant’s animal behaviour expert, who had sought to rely on a Facebook Study he conducted as evidence that dog strikes were common and caused serious injury. The Judge rejected that evidence as it was simply incapable of any proper analysis given it was wholly undefined in its terms and scope.  He also rejected the Claimant’s reliance on Daily Mail articles of previous dog strike cases.

In the majority of reported cases involving dog strikes, the claimant has lost.  This includes Whippey v Jones[4], Hunt v Wallis[5], Addis v (1) Campbell and (2) Leaman[6] and Fry v Morgan[7] and now Menzies v Doggy Day Care Ltd.  Although the Claimant in Cooke v Jackson[8] succeeded in negligence, there were particular circumstances (cycling on a pedestrian park with the dog running behind her) where this finding was justified.

Claimants are advised to approach litigation in animal strike cases with a generous degree of circumspection. The failure of this claim highlights that Animals Act cases related to strikes by dogs are unlikely to clear the first hurdle in s.2(2)(a) because of the difficulty proving that being knocked over by a dog is likely to cause severe damage.  Further, in the absence of some negligence on the part of the animal handler, or expert evidence establishing some aggressive characteristic likely to cause personal injury in certain circumstances where an owner or keeper should have known about the aggressive characteristic, animal strike cases in general are very difficult to win for a claimant, whether brought under the Animals Act 1971 or in negligence.

This article was written by Gemma Witherington and Jasmine Murphy.

The authors are barristers practicing in the fields of personal injury at Hardwicke and who specialise in bringing and defending Animals Act claims.  Jasmine is one of the editors of Kemp & Kemp’s recent chapter “Injuries caused by Animals”.