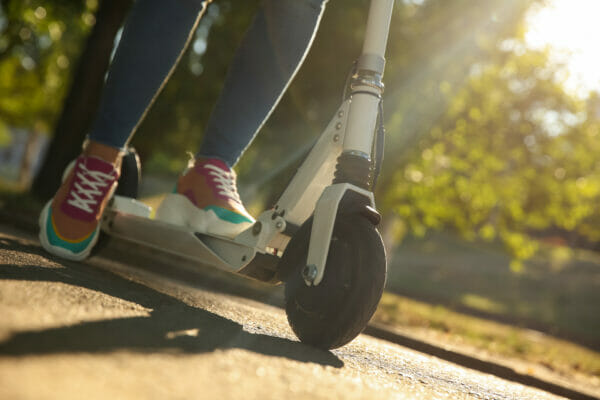 A lasting impact of the pandemic appears to be the shift in travel behaviour towards increased use of e-scooters and bicycles, powered or non-powered. E-scooter rental schemes have been up and running in London and other cities since June 2021. However, my observation of London traffic suggests that most e-scooters being used in London are privately owned and consequently illegal to use on roads, pavements, cycle lanes and other public places. Although rental scooters come with third party liability insurance, privately owned e-scooter riders likely remain uninsured in public places. This leaves any damage caused by an uninsured e-scooter rider to be covered by the Motor Insurers’ Bureau[1].

E-scooters create risks for their users, as well as others. The Department of Transport’s 2020 annual report about reported road casualties in Great Britain released in September 2021 showed a 16% increase for “other vehicle occupant” casualties. They think this may be linked to an increase in use of vehicles in this group, including e-scooters. In an additional fact sheet about e-scooters the DoT note that in 2020 there were 460 accidents reported involving e-scooters, with 484 casualties arising out of those accidents and one death of an e-scooter rider. These statistics pre-date the commencement of the rental schemes and I expect the 2021 figures to be much higher.  For example, so far in 2021, I have noted nine deaths of e-scooter riders reported in the press.

The DoT statistics also showed that pedal cycle traffic increased by 46% in 2020 compared to 2019 whereas all motor vehicle traffic decreased by 21%. Although overall pedal cyclist casualties in 2020 were 3.5% less than in 2019 (down from 16,884 to 16,294), due to the increased pedal cycle traffic there was a reduction of 34% in the pedal cyclist casualty rate from 2019 (the casualty rate per billion vehicle miles). However, there was a huge 41% increase in pedal cyclist fatalities from 100 in 2019 to 141 in 2020[2].  There are many possible explanations for this such as more inexperienced cyclists on the roads or dangerous drivers taking advantage of empty roads during lockdown.  The most common contributory factor allocated to vehicles involved in a serious or fatal collision with a pedal cycle is “driver or rider failed to look properly”.

The dangers that highways and paths present to cyclists, motorcyclists and e-scooter riders are not new. E-scooters appear to be particularly hazardous to ride, with five of the eight deaths reported in the press mentioned above resulting from a fall from the e-scooter or a crash with a stationery object with no other vehicle being involved.

In recent years, claims by cyclists under the Occupiers’ Liability Act 1957 for accidents caused by features of land or highways have been difficult to win.  In Edwards v Sutton LBC [2016] EWCA Civ 1005 the claimant was pushing his bicycle over a small ornamental bridge in a park when he fell off over its low parapet onto rocks and water below.  The Court of Appeal overturned the judgment against the Council on the basis that although the bridge presented, objectively, a danger, it was an obvious danger. In order to discharge its duty under the Occupiers’ Liability Act 1957 the Council did not have to close the bridge, give warnings or increase the height of the parapet.

In Liddle v Bristol City Council [2018] EWHC 3673 (QB) the claim by the estate of a deceased cyclist also failed.  There were similar features of this case to Edwards in that historical aspects of the premises were considered in the judgment.  The cyclist was cycling along Princes Wharf in Bristol when his tyre became stuck in the many rail tracks crossing the Wharf and he fell into the dock, suffering a head injury.  His claim failed because the Judge considered that the risks such as the edge of the dock and rail tracks were obvious dangers for which no additional warning was needed.

Along the same lines is the case of Price v Oxfordshire County Council where HHJ Melissa Clarke allowed the defendant’s appeal and remitted the case back to the County Court for trial.  The claimant in that case was cycling after sundown along a pavement which was a shared path for pedestrians and cyclists. There was a grey signpost in the middle of the pavement on the solid white line which separated the pedestrian and cycle paths. The signpost had a roundabout sign and a light to illuminate that sign for traffic approaching from the other direction.  This is an image of a signpost on the cycle path alongside Black Bourton Road.

The defendant appealed the finding of liability and the claimant cross-appealed the finding of contributory negligence. HHJ Clarke thoroughly set out the relevant law which she summarized in relation to this case as (at paragraphs [43] and [44]): “There is a duty on any person, including a person in the position of the defendant, not to create a real source of danger on the highway which would affect the safety of road users, both careful and negligent. The defendant had a duty to use such care as was reasonable in all the circumstances (and to avoid doing that which was unreasonable in all the circumstances) in the manner in which it positioned and maintained the signpost.  The fact that the signpost may have represented a foreseeable risk of harm, however, is not enough. Not all foreseeable risks give rise to the duty to take remedial action. The question for the judge in this case was whether this signpost, in this place, in all the circumstances, represented a foreseeable risk of harm at all, and if so whether this risk was something more than the everyday risk which cyclists inevitably normally face such that the Defendant should take remedial action.”

HHJ Clarke overturned the judgment.  In particular she found that the judge had jumped from finding that the signpost was a hazard to extensive consideration about what the defendant could or should have done about it without analysing first whether it was a real source of danger. She remitted the case back to the County Court for a retrial.  Since then the defendant’s Counsel has indicated that the claimant has decided not to pursue the matter to a re-trial[3].

As e-scooter and bicycle traffic remains on the increase, we should expect to see an increase in such claims by vulnerable road users. Litigators need to keep in mind the relevant principles and that not all foreseeable risks or hazards give rise to a duty to take remedial action.