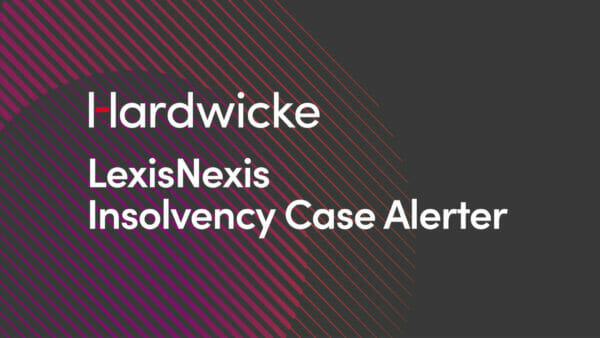 These case summaries first appeared in LexisNexis’ Insolvency Case Alerter.  They represent some of the more interesting insolvency decisions to have been published recently.

H (the liquidator of both T and one of T’s creditors (O)) sought a public examination of D. D was a 78-year-old resident of Bermuda, T’s ultimate beneficial owner and alleged to be a de facto director. As liquidator of T, H had issued a claim for damages against D, alleging that D had used T to participate in a missing trader VAT fraud.

Burden of proof: under s 133 of the Insolvency Act 1986, H had the burden of proving an examination was necessary for the purpose of fulfilling his functions as liquidator in this liquidation. The burden then shifted to D to demonstrate that notwithstanding the need for a public examination, it would be oppressive to make an order. H had not asked D directly about any of the issues advanced for public examination or asked for delivery up of a specific document. Unless it was proven that D was a de facto director of the company, he was not an officer. As matters stood, he was an outsider during T’s life. In those circumstances, summoning D for a public examination under threat of imprisonment or arrest if he was not compliant, to answer questions about his conduct on oath and under compulsion, would plainly be oppressive.

Alternatively, there was no useful purpose for a public examination based on the evidence provided (see paras 65 to 75) and there was a real risk that the ‘consequential questions’ said by H to be necessary would improve his position in the litigation against D. Although the court had power to ensure that such an examination was conducted properly, this did not mean an examination would be permitted: it was too great a burden on a busy court to ensure that any question did not relate to the claim and by accident or design give H an advantage in the litigation.

Beaufort Asset Clearing Services Ltd (‘BACSL’) was an investment bank holding client assets and money. It was insolvent by March 2018 when it was placed into administration upon the application of the Financial Conduct Authority. That was a special administration in accord with reg 5(1)h) of the Investment Bank Special Administration Regulations 2011 (‘IBSAR’). The principal purpose of the administration was to distribute the assets and money held on behalf of clients and a distribution plan was approved by the court in July 2018.

The primary application before the court was a winding up petition presented by the administrators to convert the administration to a liquidation. The petition was presented on 7 July 2020 and came on for directions on 21 July 2020. At that hearing the court declared that the primary purpose of the administration had been sufficiently achieved (on the basis that save for £10m odd of assets that had not been claimed, all of the assets had been returned) and directed that ‘long stop’ notices

in accord with the approved plan should be served to enable the petition to proceed when the notices expired. The petition was accompanied by an application for discharge of the administrators and release from liability pursuant to paras 79 and 98, Sch B1, Insolvency Act 1986.

The court determined that the objectives required by reg 10 of IBSAR had been met, namely that the return of the assets had been sufficiently achieved (by distribution and the service of long-stop notices), there had been frequent and substantial engagement with the relevant authorities (the FCA consenting to the petition) and the administrators had taken all reasonable steps to wind BACSL up in the best interests of creditors.

The court considered that whilst IBSAR did not expressly provide for the making of orders moving BACSL from special administration to liquidation there was no provision preventing the same and the general rules on the making of a winding up order applied. Determining that BACSL was a company, was heavily insolvent and a continued insolvency process was necessary to protect the undistributed assets, the order was consequently granted with the ancillary orders for discharge and release.

The claimant was interested in acquiring the Force India F1 racing team (‘the Team’) following the administration of the company which operated it, Force India Formula One Team Ltd (‘the Company’) in July 2018. The administrators wished to act quickly either to sell the Team or to rescue the Company by selling its shares in return for a substantial cash injection before the Team’s staff were poached by other teams and in time for the Belgium Grand Prix at the end of August 2018.

Another potential purchaser, Racing Point, offered to rescue theCompany alongside a fallback offer to purchase the business and assets ofthe Company. The administrators offered Racing Point a two-week period of exclusivity during which to conclude their purchase of the Company’s shares. The share purchase fell through and the administrators concluded that they were committed to selling the Company’s business and assets to Racing Point for the fallback price (which was lower than the purchase price that had been offered by the claimant). The sale went through with Racing Point, which is now the name under which the Team competes.

The claimant alleged that the administrators failed to conduct a fair and proper sales process and negligently misstated the criteria they would follow in assessing bids.

The administrators did not do or say anything to suggest that they assumed a personal responsibility to the Claimant. Further, it would be inappropriate to impose a duty of care on administrators to potential purchasers as doing so would affect the administrators’ performance of their functions and drive them to take an overly cautious and lawyered approach to what was already a demanding commercial task. In any event, the administrators had not acted negligently.

Leite’s appointment over Nilza was recognised under the Cross Border Insolvency Regulations (‘CBIR’), and he applied for an order against Amicorp to deliver up various documents, pursuant to Articles 21(1) (e) and (g) of the Model Law and/or s 236 of the Insolvency Act 1986. Leite then applied for his appointments over Buglin and Endipa to be recognised, and for the same relief in that capacity.

Meanwhile, there was a pending application in Brazil to extend Nilza’s bankruptcy to include Buglin (making it jointly liable for Nilza’s debts) (‘EAs’), and an order appointing Leite as Provisional Judicial Administrator of Endipa and extending Nilza’s bankruptcy to include Endipa (‘the Decision’). The Decision was then modified, which was subject to a pending appeal.

Whilst opaque, it appeared that there was a connection between the ownership and management of Endipa and Nilza and another company (‘Tipuana’), and a possible commingling of assets. Amicorp provided corporate services to Tipuana.

The EAs recognised as foreign main proceedings with Leite as foreign representative pursuant to the CBIR (recognition pursuant to common law not considered). The Decision did not provide a sufficiently clear indication for the presumption to apply that the EAs are ‘foreign proceedings’. The Companies would probably (though not certainly) be consolidated into one insolvent estate. ‘Foreign proceedings’ may be recognised in relation to a single, particular debtor notwithstanding the proceedings in the foreign jurisdiction relating to a group of entities. In rare circumstances, ‘pooling orders’ may be made under English law (per Re BCCI (No 3) 1 BCLC 1490). The EAs were ‘collective proceedings’, judicial proceedings in which the Companies’ assets and affairs were subject to control or supervision by the Brazilian court, and ‘interim proceedings pursuant to a law relating to insolvency’, ‘ for the purpose of liquidation’ for the purposes of the CBIR.

Amicorp ordered to provide disclosure, requiring details of searches undertaken. The court was satisfied that Amicorp may hold documents relating to Tipuana, and it was likely that information may provide insight into the relationship between Nilza and Endipa.

Transform Medical Group CS Ltd (‘Transform’) unsuccessfully defended a group litigation claim made by women affected by non-medical grade breast implants, manufactured by Poly Implant Prothèse (‘PIP’) and fitted by Transform. After entering administration, judgments were obtained against it for damages of some £6m and costs of some £11m. The judgments went unsatisfied.

Transform claimed that its solicitors (‘BLM’) and barrister, Mr Waite QC (‘W’) (together ‘the Defendants’) negligently advised it not to inform Hugh James (‘HJ’), the women’s solicitors, that it was not insured against the claims of some of those claimants. Transform’s negligence claim was assigned to Involegal, an LLP whose members were HJ’s equity partners. The stated purpose of the assignment was to enable recovery by the uninsured claimants and HJ in respect of the unsatisfied judgments. Involegal contended that, had HJ known of the insurance position, many of the women would not have registered under the group litigation order or would have stayed their claims. Instead, Transform was obliged to deal with the uninsured claims, forcing it to enter administration and suffer loss.

The Defendants applied for summary judgment and strikeout. The main ground of the applications was that the assignment of the claim savoured of champerty and/or maintenance and was therefore invalid.

His Honour Judge Jarman QC noted that the principles relating to champerty and maintenance were well-established rules of public policy. However, as per Norglen Ltd v Reeds Rain Prudential Ltd [1999] 2 AC 1, the position of liquidators and trustees in bankruptcy was held to be an exception because they act on behalf of creditors and often have no assets to fund litigation; the only practical way to turn a cause of action into money for creditors is to sell it.

The court held (inter alia) there was a realistic prospect: