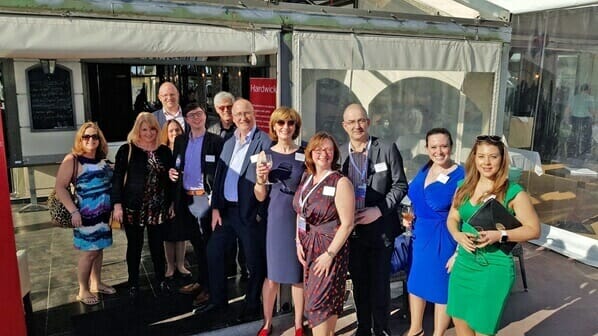 Welcome to the March edition of the Property Newsletter from Hardwicke.

We had a good week catching up with contacts old and new from a wide variety of disciplines at MIPIM. From the Hardwicke party, to hula-hooping on the beach, via countless coffee meetings and some great events (the Women In Property breakfast being a fantastic positive example), it was hectic as ever. If we made contact for the first time there, welcome to our monthly newsletter.

In this month’s edition, James Hall considers the potential minefield of overage clauses, Edward Rowntree reveals his untruth from last month’s unrobed section, and Jamal Demachkie teases us with his 3 facts, the answers to be revealed next month.

We have a number of further seminars planned over the coming months, it would be lovely if you can join us.

Welcome to the March edition of the Property Newsletter from Hardwicke

Daniel Gatty has been in the Court of Appeal fending off an appeal against a judgment he obtained in 2015 for a freeholder that had built a new floor on the top of a block of flats, leading existing lessees to sue alleging structural damage to their flats.

Emily Betts (led by Michael Wheater) succeeded before the Court of Appeal in a case concerning the service regime under the Party Wall Act 1996. Michael and Emily represented Mr Knight, the successful Appellant, and argued that the service regime was permissive so that a method of service could be used, even if it was not expressly stated in the Act.

What an eclectic month for Steven Woolf: Contested Charity Proceedings in Leeds, evicting Travellers in Peterborough  fighting off forfeiture in Southend and opposing mortgage possession in Maidstone. Plus the usual mix of paperwork, conferences and even time for a Mediation.

When not battling through the snow to represent his client at a mediation of a dilapidations dispute, Simon Allison has mostly been advising from the comfort of his desk. Topics for this month included lease renewals (validity of notices, redevelopment, the effect of the Pubs Code), service charges (carpets, dispensation, apportionment, communal heating), boundaries, party walls and injunctions for trespass.

John de Waal QC is spending far too much time thinking about cladding.

Jamal Demachkie has spent February with his head in the books – professional negligence, easements, and restrictive covenants; and has had a couple of urgent outings in the interim apps list.

Clare Anslow has had a busy month travelling the length and breadth of Britain dealing with a variety of housing and property matters – so far, Truro has been her longest train journey. She is currently seconded for 2 days a week to a Housing Association, advising on a variety of leasehold and tenancy matters. Next month will see her regularly in the First Tier Tribunal dealing with some unusual service charge matters.

Cameron Stocks‘s February was largely spent in the FtT arguing about major works and administration charges. When not there, Cameron was acting for a local authority seeking an unlawful profits order for unauthorised subletting and advising on damages under the Equality Act 2010 for disability discrimination in possession proceedings.

February has been an exciting month for Katrina Mather, having been instructed on a matter relating to the Carillion liquidation, advising on the effect of winding up proceedings on steps a commercial landlord can take to recover rent arrears and appearing in a contested 1954 Act trial.

This month John Clargo has been involved with business lease renewals, overage, and continued joint ownership/beneficial interest issues.  The greatest variety across the month has been in the timing of last minute adjournments by the court: one the night before a hearing, one on the morning of a hearing listed for the afternoon and one at the hearing.

Andrew Skelly had two trials adjourn because the courts did not have a judge available.  I was grateful to have had plenty of notice of the adjournments, though, with the court in each case only phoning mid-afternoon on the day before. A third trial, to deal with estate agents’ commission, also went off when the agent filed a notice of discontinuance.

Lina Mattsson has had an exciting outing to the Court of Appeal. Being a sore loser she’s still annoyed about the outcome though (some 3 weeks later…). She’s clings to the fact that her client only lost once they instructed a silk (Lina having won all the way). Other than moping and having the occasional rant about LJ Lewison, Lina has been advising on easements, boundary disputes and damages for unlawful eviction.

Amanda Eilledge has had a good week at MIPIM after a month of tricky trespass claims. She has also been advising in 2 different cases concerning directors who entered into property transactions without authority.

Comment: James Hall - Overage: it continues to be a potential minefield

Lina Mattsson appeared on behalf of the respondent tenant. The landlord had refused to grant the tenant consent to assign 2 residential apartments. It had given three reasons. It was accepted on the appeal to the Court of Appeal (this being the landlord’s second appeal) that one of those reasons was bad, namely that the landlord had demanded an excessive fee for the assignment (£1,500 plus VAT instead of £350 plus VAT, which had been found to be reasonable). Henderson J had held that although two reasons for the refusal were “good”, the third reason had vitiated the good reasons, as the Landlord had stated that it would not proceed with the application to assign until such time that the tenant had given an undertaking for (the unreasonable) fee. The Court of Appeal disagreed. It held that when there was a mixture of reasons, some good, some bad, the landlord was entitled to rely on its good reasons if these were free-standing and each had a causative effect. The landlord’s refusal had therefore not been unreasonable pursuant to s 1(3) of the Landlord and Tenant Act 1988.

The Party Wall etc. Act 1996 – service of awards by email

Michael Wheater and Emily Betts appeared for the successful appellant who appealed against a decision that service by email of a third surveyor’s award in a party wall dispute did not constitute good service for the purposes of s 15 of the Party Wall etc. Act 1996. Allowing the appeal, the Court of Appeal held that the judge had been wrong to hold that the valid methods of service for the purposes of the 1996 Act were restricted to those set out under s.15 or at least did not include electronic service. The word “may” in s.15(1) should be construed so that the provision was permissive, rather than restricting service to the choice of methods it set out. The award had therefore been validly served by email.

Fencing easement – running with the land –  grant in a conveyance

The appellant appealed against a decision that it owed an obligation to the respondent to maintain a fence separating their respective properties. The appellant was the successor in title and claimed that the covenant in question did not run with the land as it was a positive covenant. The appeal was dismissed. Birss J held that although building and maintaining a fence was a positive obligation, it was recognised that a fencing obligation can run with the land. Further the rule that positive obligations do not run with the land applies to covenants, not to grants. If on its true construction, a clause purports to create a fencing easement, there was no good reason why it should be declared that such grant is legally impossible, as contended for by the appellant.  Therefore, in a case in which the easement was construed as a grant, the rule that positive covenants do not run with the land is irrelevant.

Edward explains: For those who guessed number 3 – you are right! Whilst I love skiing, I’m not that good…

As to number 1, I did leave my then girlfriend in Oxford in the middle of a romantic day out to sing with the Choir of Christ Church Cathedral, Oxford at the Royal Albert Hall when one of their basses fell ill.  I was stuck on the end of the row, next to Jose Carreras who was singing Christmas solos with the choir.  For reasons which are still not quite clear, the following day my girl-friend indicated (with particular clarity and a certain degree of venom) a lack of interest in the potential role of Mrs. Rowntree!

As to number 2, I won a school prize and picked Lord Denning’s Family Story.  I asked him to sign it and he replied only on the condition that my family went to his house for morning coffee.  I still have the letter he sent me plainly typed himself!  We all went down to Whitchurch where, after showing me the Great Seal and other legal artefacts, he reached for his early edition of Culpeper and each and every one of the first half dozen herbs he selected were found to be ‘good for the wind’.  The book was returned to shelf with an air of embarrassment and coffee was served.

To find out more about our Property team and their work, visit the Property page on our website.